You will be pleased to know that we are providing you information about "Shriji Temple (Radharani), Barsana Dham".

Like shri Lord Krishna is eternal and his incarnation happens time-to-time on earth. In the same way, Shri Radha Rani is also eternal. In fact, she is the power of god. She takes incarnation on earth. It is said in Narad Panchatantra that :

There was a well-known king named Vrishbhanu. He had all assets and was devoted to all religions. He born in good family and knew all scriptures. He was rich, generous and had all eight attainments named Anima-Mahima. He was sober, elite and devotee of lord Krishna. His wife was Devi Sri Keertida. She was beautiful and born in great family. Shri Keertida was beautiful like Mahalakshmi. She had good character, devotee of lord Krishna and was a faithful wife. Shri Radha ji was born from her womb on Radha Ashtami day in Bhadrapada month.

She was extremely beautiful. A small light like moon was leaving from him. Her beauty was singular in whole universe and body was free from all defects. Whose is well-known as Krishna Vallabh in Veda scriptures. She was beloved to lord Krishna.


Birth of Shri Narayan Bhatt and give information about shri Radha ji to world.

Bhairav named tailang brahmin was lived in Madura port at south of the country. He was devotee of lord Krishna. He had one son named rang and who was known by bhatt bhaskar. Bhaskar Bhatt had two sons. Elder name was Gopal ji and younger son was

"Shri Narayan Ji"
This Narayan ji is known as Shri Narayan Bhatt ji and he was incarnation of Narada. 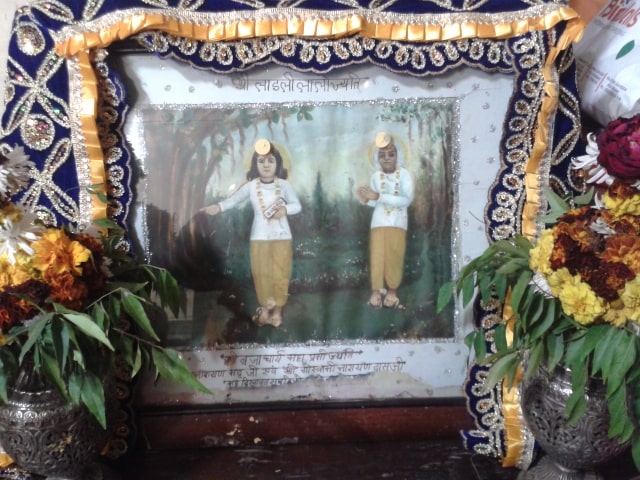 Once upon a time Narada came into Braj Mandal due to not getting peace anywhere. But at that time pilgrim group were lost. Then Brij Bihari appeared in front of Narada and said that you are devotee of me. Now-a-days Braj Mandal is missing, so please go there as soon as possible and save Braj. Narada went to the south and took birth from the womb of devi yashomati. Time of birth was Vaishakh Maas Shukla Paksha in Vikram Samvat 1588. He begins to move slowly. Father did sacred thread ceremony of him. Pitriwya Shankar taught him grammar, veda, and vedanta. He came into home after learning all knowledge and giving Guru Dakshina. There he created many religious texts group. Thereafter he visited Godavari for bath. At the same time Lord Hari with Radha ji appeared in front of Narada and said that please come into Braj Mandal. Please save it. Statue of Madan Mohan is into Radha Kund. Krishandas is serving as brahmachari and Sanatana Goswami is also present there. Please consider Krishandas as your Guru. You go there and learn mystery community after taking mantra initiation.


Almanac of the Day